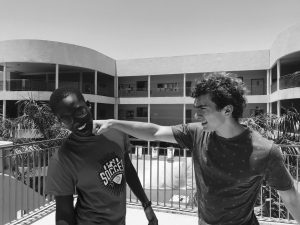 As we can observe in this recreation of what a daily African American student could live when attending a newly “desegregated” school in the US. In this photo we can see a white student violently attacking a black one. The reason behind it is that the black student was one of the first student allowed inside Little Rock’s Central High School. The African American was, not long after arriving at school, drove in corner to be beat up by one of his fellow classmate.The localisation of the photo, therefore, since it was supposedly desegregated in 1957.One of the method employed in this photograph was the black and white. it was used to further deepen the contrast between the two men which heightens the difference in color. By getting rid of all the unnecessary colors, the main focus focus of the picture will not be diverted from the scene and the meaning of it. But as we can see without any color the two men seem alike except for their skin color which was the base of this segregation. In this photograph we can see that the school is empty which isn’t usually what happened during the Little Rock’s Central High School incident. It was meant to show the fact that not only no one would support the black student it also shows that no one would oppose the white student to attack the black one.  This scene not only show that violent acts were committed against the African American community because of the color of their skin it also shows that it was mainly accepted in the White American one to punish them for it.

Self-determination is the right of nations and nationalities to be independent and form their own governments. This right was first brought by Wilson Woodrow, the president of the United states, with his fourteen points which would lead to world peace. Those fourteen points included self-determination which led to the fall of the Ottoman and Austria-Hungarian Empires. It is also significant because there is still an issue with self-determination even if this right is in the charter of the United Nations. Even if the people have the right to declare their independence and create their own government, sometimes, this right is not granted. We only have to take the example of Catalonia, this region of Spain did a referendum the first of October and the “yes” won. But as an answer to this referendum the government of Spain used the article 155 of their constitution to regain control of Catalonia. Therefore, Spain would’ve to face UN, since, it went against the Human rights but no sanction has been sent yet. But just the fact that self-determination was not followed is a sign that the issue of self-determination is still there and significant. Furthermore Catalonia is not the only one facing the same problem there is also Kurdistan in the Middle East. 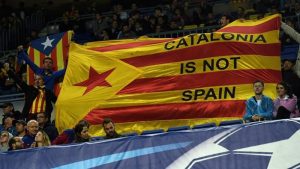 The League of Nations was also first brought by Wilson Woodrow who wanted an international organisation to lead Humanity to world peace. But with WW2 we know that this organisation failed, but why ? First, this organisation didn’t possess a real power on the international scene, therefore, the League of Nation (LN) wasn’t really respected. Furthermore, with the permanent members of the council, they could veto any sensitive subject that would affect their agendas. Second, the fact that it relied on collective security, because, in theory, this principle would be good but in practice the countries wouldn’t want to defend another country without something in return because the countries would not want to send their own troops, use their own money and weaponry for nothing the countries would only follow their own respective agendas. This is the mean reason why the LN couldn’t stop the WW2. But with its death came the birth of the United Nations that should be an improved version of the LN but will it be able to stop the storm that’s coming ? We can only hope that it will.

I’ll, first, talk about the battle of Somme in general. This battle started the first of July 1916 and was started by the British to draw the German soldier from Verdun as we can see in Condon chapter 7(Condon Ch7-1vudier). The offensive started really badly for the British troops losing nearly half of the men of the first attack. This was a hard attack because with the invention of new deadly weapons the defenders now held a huge advantage over the enemy since artillery are hard to move. But around the end of the offensive the British took a small territory over the Germans but without real breakthrough. The only purpose of this attack was to shift the attention of Germany from Verdun to Somme. It succeeded in a way because the French were victorious in Verdun.

Secondly, in this battle, the use of machine guns was really effective against the British troops resulting in thousands of death which really help the German army. Furthermore, it is at Somme that the first tanks were use by Britain, but those tanks didn’t really helped because they could only move at the speed of 5km/h and they had mechanism problems. Therefore, those new technologies had a great impact in the battle of Somme with the artillery and the new machine guns except the tanks. Those, even if they weren’t of any good in WW1, were improve a lot and then were use has one of the main component of the German army in WW2.

The importance of industrialization in WW1 is often underestimated because it doesn’t define the actual military strength. But around the middle of the 19th century, the definition of a strong economy changed and became more like what we know now. It was now define by the iron, steel and coat production. This impact all the wars after this moment. Furthermore, the new weaponry were made from those materials for instance since the British were the first to industrialize their power of production was higher than everyone in Europe as we can see in the document Industry War and Power. This greatly impact the dreadnought race between Britain and Germany because even if Germany had a better steel production the head start in industrialization of Britain permitted them to win this race. This also affected the war because of this Germany wasn’t able to pass the Britain’s blockade in the North Sea. This affected World War 1 because Germany couldn’t receive any kind of  the maritime supply of goods  . Furthermore, Germany relied heavily on imports to feed their population and supply their war industry. So the fact that Britain took the lead in the dreadnought race greatly influence the war and this lead was due to industrialization.

Copy of Industry War and Power-280uqrj

Welcome to your brand new blog at Edublogs!

To get started, simply visit your blog’s dashboard, edit or delete this post and check out all the other options available to you.

We can walk you through step-by-step in our guide to getting started with your blog.